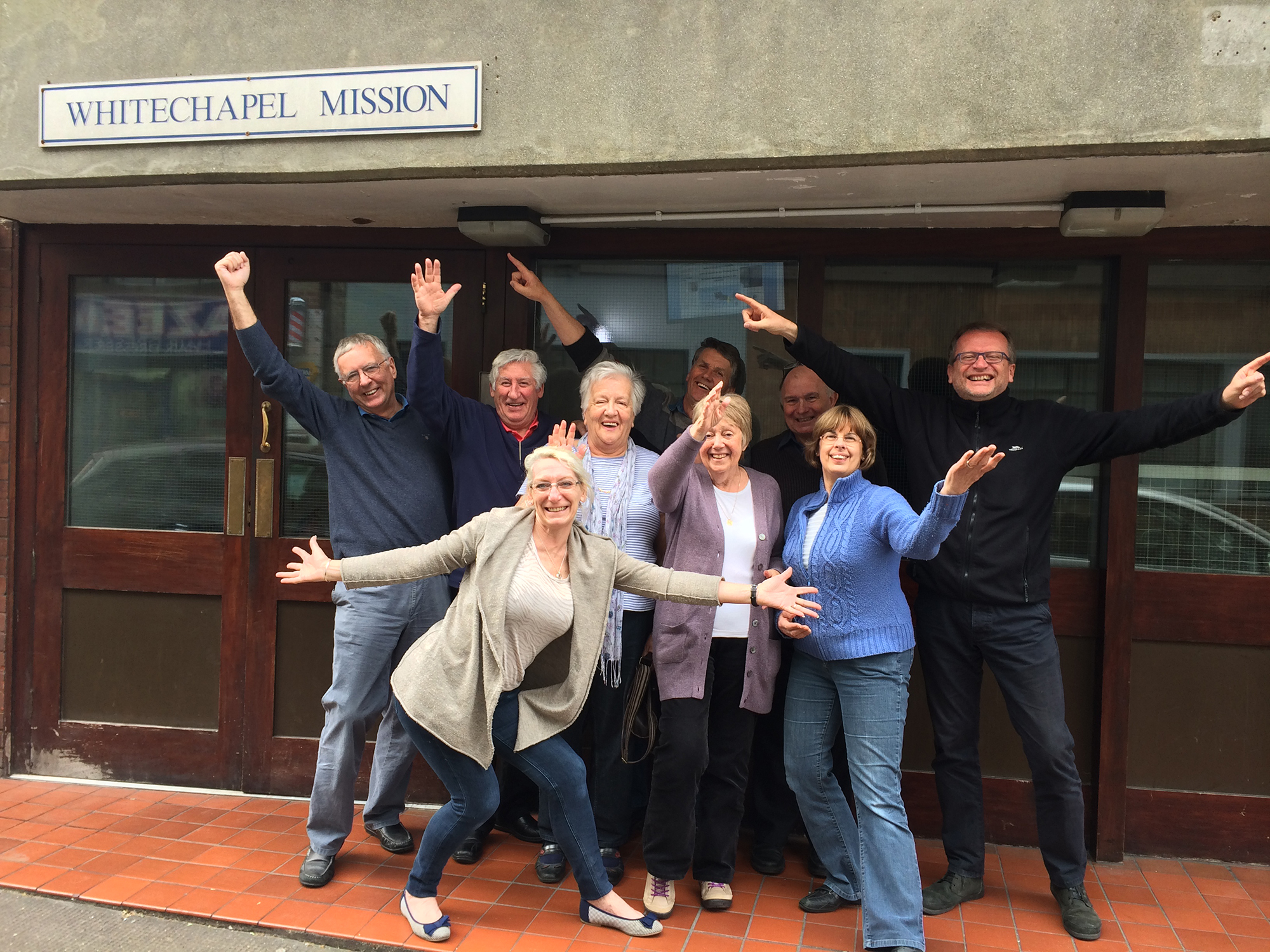 Categories:Volunteering
by Chris Lake |
on April 5, 2014

THERE were eight of us. Martin, Jan, Dave, Sally, Dave and Nance, Tony Morling and me. On the Tuesday we would leave the hotel in Stratford very early, catch the bus to the Whitechapel Mission and start feeding breakfasts mainly to men and mainly to those who slept rough outside on the streets from 6am onwards.

In a curious way I was looking forward to it although I never made it to the Mission that first day. I wasn’t wimping out (I had a stomach bug) but afterwards I was told by the group about their morning … a very unusual morning for all of them … for they weren’t feeding a mere handful of people. No; for usually there are anything up to 300 people who pass through the Mission doors each day and although breakfasts are only 50p each, some of the customers can be very fussy with what they want to eat and drink and as Sue and Tony Miller, who run the Mission told me the next day, you never know who to expect; what other problems their ‘customers’ might have and – quite important to a mission such as this – what mood their clientele may be in.

Anyway, so it was that our Methodist Church group got down to work.

To this day I don’t know quite how many eggs they cooked … over 200? How many loaves of bread they toasted; how many sausages, slices of bacon; how many tins of beans they opened … you get the picture … but it was a learning for everyone and although most of the customers seemed to appreciate their early morning meal, not all of them said ‘thank you’ for the Mission’s clients aren’t your normal, everyday – type restaurateurs. If they had been they wouldn’t have been there … but then who knows what drives anyone to live under the stars; although as Sue said; ‘don’t think they’ll all on drugs or alcohol. In our experience not all who have been reduced to this nomadic way of life are alcoholics.

So when I DID make it to Whitechapel the next day … this time to help our group sort out and label clothes before hanging them up on a huge stack of hangers Sue and her husband Tony, who have been running the Mission for the last 30 years, gave a few examples of the lives of some of the people who’d they known. ‘We keep a book of all of the people who’ve come here, some of them for many years, but who’ve died. We decided to do this because for some of them when they do pass on, there’s no-one at their funeral; no-one to visit their paupers’ graves. But the book, and our telling of their stories and their personalities, I like to think, keeps their memories alive’.

I could write more but I’ll leave this article with one story Sue told the group; about a young woman who had turned to prostitution, drugs and alcohol.

‘Which came first, the drugs or the prostitution?’ Sue had asked – a reasonable question, you would think. But instead the woman looked back at her, almost in disbelief. ‘What do you think?’ She was told. ‘Mum’ (who was also a prostitute) ‘put me on the streets as soon as I was 11 …’

I cannot put into words the admiration I have for Sue, Tony, the staff and volunteers and the Whitechapel Mission, nor for its necessity for people whose lives have seen them with no homes to go to; people who could be you or me … Humanity. For aren’t all of us part of a greater society; God’s own people?

This site uses Akismet to reduce spam. Learn how your comment data is processed.